Amitabh Bachchan’s retweet caught my eye today when he called out on Times Now for reporting news about his illness as fake and incorrigible. Times Now released a video stating Mr. Bachchan was Covid-19 negative now. He is still in the hospital since last fourteen days. Millions of his fans are hoping he will be well soon. 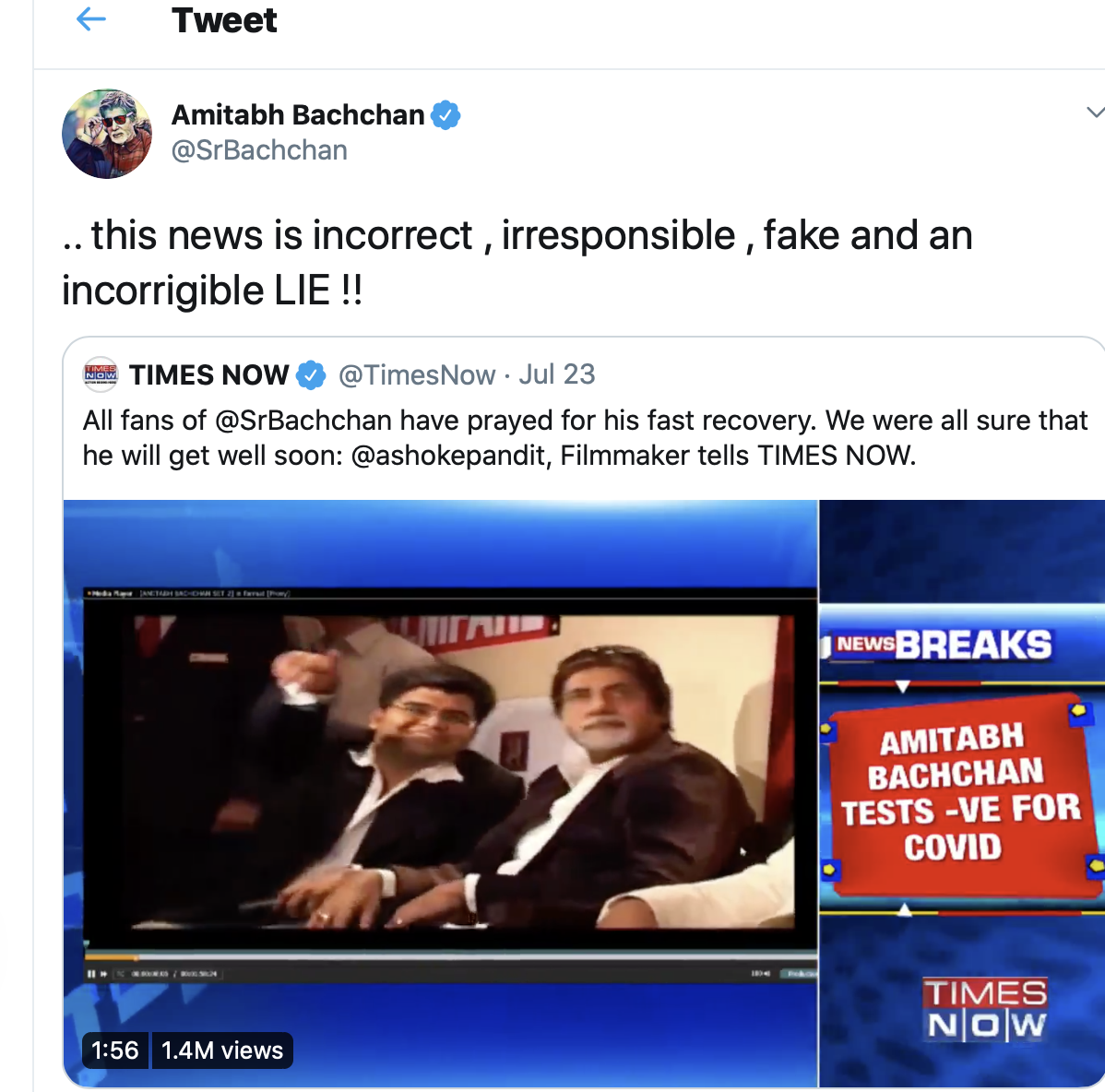 I may not agree with how he has led his life. I think Amitabh Bachchan enjoys almost God-like status with his fans, but he has seldom done enough for the society. When I mention this to the fans, they always tell me how he secretly supports various charities. I have never seen him stand for the #metoo movement or recently the #nepotisminbollywood movement. He could do wonders for the society, if he just stood up for things that matter. Yes, I want him to do more for the society, he has failed in this section. But, his life as a professional actor is exemplary.

There never was and never will (maybe) be an actor like Amitabh Bachchan. His belief and perseverance to stay on in the industry in his early years is a lesson for everyone trying to do something new. He struggled for seven years in the industry before getting his first break. He was dismissed for being too tall, and yes he was also rejected for a voice audition. Today, it seems unbelievable, because i am yet to meet a person who is not fond of Amitabh’s voice. He got his first break in Saat Hindustani, and he went on to win a national award for his performance. But, it took two arduous years to get his next break in Zanjeer and slowly he was replacing the likes of Rajesh Khannas. He saw success as the angry young man on-screen, but offscreen he was a very polite person with no appetite for scuffles or physical fights. When he was dwindled off his wealth and covered with debt from his venture ABCL, he reinvented himself.

He was in a financial hole when he started his career in TV as the host of Kaun Banega Crorepati. Audiences loved him, and he started the trend of Bollywood stars hosting their own shows.

I am yet to see an actor who can entertain all ages. Amitabh’s presence on-screen is electrifying to say the least. He has starred in close to 250 films, won national awards for many and has been written off at many stages. His perseverance to go on, reinvent, tread on unknown waters defines him. At age 77, before he got infected with Covid-19, he was still acting and active.

Some of my favorite films of Amitabh Bachchan are Piku, Amar Akbar Anthony, Deewar, and Silsila.

Naperville is Lit to the Hilt

‘Tis the Season/Year for Giving